Have you planted already?

Soaking, drenching rains can be hard on plants if you made the decision to plant early but let me explain what is most important.

1.  Make sure your containers have drainage holes in the bottom and that they are not plugged.  Tip them over, ram a screw driver in the drain hole and make sure they haven't silted in and can drain well.  Sometimes that hole will plug up and fail to drain water at a fast enough pace and your plants will sit in water.  If you see water puddling on the top of your pots you must unplug that hole.

2.  If you have planted Coleus you must move it into the garage.  Get the old man out of the recliner and have him help.  I know he hates it and complains a lot but if you give him "that" look he will do it.  It always works around here.  All plants will grow wet.  All plants will grow cold.  But coleus hates it if it is wet and cold at the same time.  A couple cooler nights coming up and with all the rain we have the perfect conditions for coleus collapse.  Don't worry about all your other combinations.  The sun and wind will return and dry those pots out and you will have no problems.  We like a good rain at our location because it means I don't have to water as much and THAT is a wonderful thing.

Questions, Comments, Concerns,  Feel free to give us a call.  Phone numbers located at www.bumpuppot.com.
Posted by Open Air Nursery at 6:08 AM No comments:


Everybody loves the Bump Up Pot! 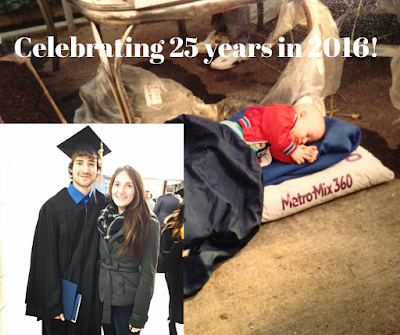 The Spring of 2016 will be our 25th year of growing flowers.  We've gone from toddlers sleeping on soil bags in a sunny greenhouse to graduating from college.  That little sister, not so little any more. As Kelli and I make plans for celebrating our 25th year, we're feeling a little melancholy.  Maybe it's the season.  Maybe it's realizing that time goes by way too fast.  Maybe it's the fact that we realize we're getting old.  We can avoid the mirror and not notice the gray hair but the sore knees and back are a sincere kick in the ass every morning when we roll out of bed.  Just maybe it's realizing that a couple of our best employees were our kids and they ain't coming back.  It's been a hell of a ride. We'd be lying if we told you we wouldn't change a thing.  In 1990 we moved to Shelton, bought 10 acres, had college degrees in science, and knew absolutely nothing about growing flowers or business.  The school of hard knocks is a great institution and some lessons are more memorable than others.

Lesson #1:
When the IRS sends you a notice of an audit and you hand the paperwork off to your accountant, there is no guarantee he will deal with it.  The second year we were in business, the auditor came a knocking.  He claimed we owed money.  With absolutely no business experience we handed it off to our accountant in Kearney who forgot about it under a pile of papers.  The second notice you get from the IRS will come with much larger numbers typed on it than the first.  Something about a penalty.  We immediately found a new accountant who was simply a master at the profession.  A couple weeks later he had it all fixed and we could breathe again.  Our accountant informed us that the IRS audited us because they felt there was no way we could have survived the year on so little.
Our response, "NO SHIT".  We sure as hell didn't need a business degree to tell him that was a fact! Moral of the story:  Keep working hard and it'll get better.

Lesson #2:
Selling flowers and ice cream in a small town has nothing to do with how beautiful the flowers are or how good the ice cream tastes.  Whether or not the locals support their hometown business depends on our opinions.  Did we vote for or against the railroad overpass?  Did we vote for or against the new school gym?  Did we raise hell with the village for water rates that are a lot higher than they need to be?  Did we buy that new truck at the Ford dealership in Omaha?   The institution of hard knocks will teach you that there are locals that will support you, wave at you, and all of the sudden stop.  For 8 years they'll stick their noses in the air when you pass them on the street to make you understand that you've done something to offend them.  They'll buy their flowers and ice cream in Kearney and Grand Island to teach you a lesson.  They'll walk up to you on the street and ask, "What do you think about that new library"?  We quickly learned that they didn't care what we thought but rather wanted to know if we thought what they thought.  At this point you have a fifty-fifty chance of being right.  If we thought what they thought, we'd keep a customer.  If we thought the opposite, we would lose a customer for 8 years.  Moral of the story:  Somewhere between 50 and 100% of the locals will get pissed at you for having an opinion and you'll still survive 25 years.

Lesson #3:
This state is full of great people who don't give a damn about our opinion.  All they want is beautiful flowers and great ice cream.  The institution of hard knocks has taught us that as business owners we will have customers who will come back again and again and again.  And as they do you will develop relationships with great people.  Many of those customers will watch your kids grow up along side you.  Many of those customers will be the best part of your spring.  Many of those customers will treat us as family.  Many of those customers will move a hundred miles away to a new job, but manage a trip to Shelton, Nebraska once every spring and do it year after year.  As these customers age along with us, we've watched them walk well, walk slower, walk really slow, and walk with a walker.  We've heard the stories of their families life and they have graciously listened to ours. We've hidden tears as they tell us stories of cancer and we've watched them come back next spring with that scarf replaced by a full head of hair. We've received Christmas cards from and attended 50th wedding anniversaries of some of the best customers any business could ask for.   Each and every day we hope that we have performed as good as we possibly could and hope we have conveyed to you how much we appreciate your support.  Moral of the story:  Because of these great customers, lesson 2 seems trivial.


As Christmas and the New year draw near, Kelli and I would like to thank you for your support over the last 25 years.  We wish you a very merry Christmas and New Year!  The one thing we'll guarantee is--if the turkey is dry, you forget the cranberry in the refrigerator, and the marshmallows on the sweet potatoes burn a little, it simply won't matter.


Posted by Open Air Nursery at 2:32 AM No comments: